We have developed anew the EX735Ag device, which raised the standards of efficiency for professional devices to a much higher level: this is the first time we give the body exactly what it “asks” for — we have implemented a “sliding” technology where the acting impulse is “sliding” in and between SCENAR and COSMODIC ranges, in a fully automatic mode.

“Sliding” technology not just provides correct approach to treatment, but makes it a high-precision one. And enlarges treatment capabilities a lot. 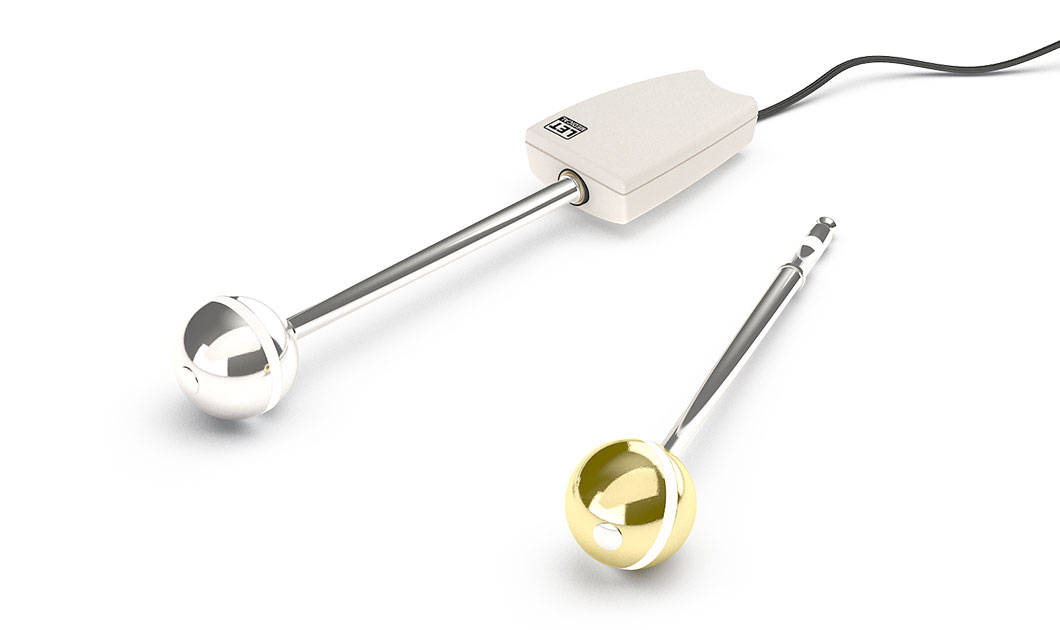 Unlike its predecessor with 2 “balls”, this electrode is more mobile in use, as due to its construction, more movements of both the patient and electrode are allowed, in case of need. The electrode can be turned to different directions or moved within inside, to act on particular place or provide action on a larger area during a session. But this is not all…

Why making one more electrode when we already have one? Both electrodes are applied in the same place, but their purpose is different.

Two-sphere electrode is acting while forming vacuum cavity due to contraction of vaginal muscles. This allows the spheres to fit tightly to the vaginal walls. The effect of such action is most of all observed in treatment of diseases of genital organs and neighbouring organs, plus special antibacterial effect. Also improvement of vision was noticed.

Electrode with one “sphere” is more mobile, has bigger size and effect it produces is different — first of all, it balances hormonal state of a woman, which becomes obvious quite soon — by good-looking appearance and skin texture, psychological state and relaxation of the whole body. And this means — no headaches and other pains, no nervousness, anxiety and depression. All hormonal and age changes are balanced, immune system becomes stronger. 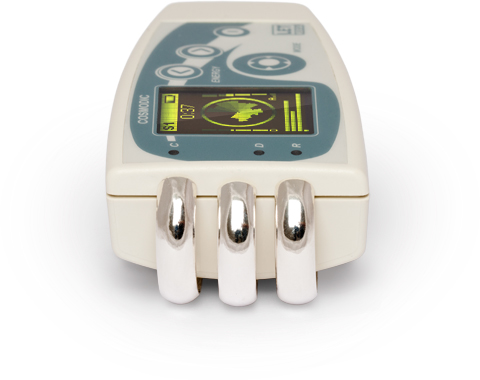 The device was positioned as “amazing but not easy to love” (it caused two polar emotions — either loved or not) and was known as “a device for women”.

By the end of 2012 we presented a new upgraded version.

The upgrade included implementation of the latest developments which before were only used in professional models. New action technologies allow providing most beneficial effect on inner organs and nervous system. And well-known rejuvenation effect is now enhanced due to the use of the device together with vaginal and rectal electrode probes.

We simplified operation, left only 3 most optimal action modes, implemented a new system of COSMODIC action with microresonances. Now the device has new and easier to understand representation of the action on the screen. Construction durability was also enhanced.

We all try to treat the disease... but we never fancy that there is another way of recovery — we can rejuvenate the body and ipso facto get rid of diseases. This is the main task which the new 715 model is performing. 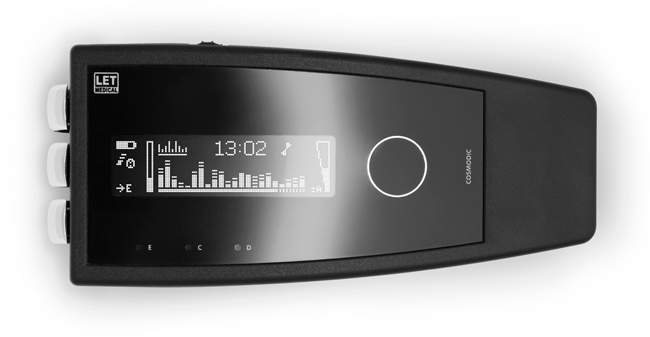 History develops in spiral and our technology is evolving the same way.

Two years later we have the famous Slider, but... twice as more complicated and, at the same time, simpler.

Now it has 4 ranges for the acting impulse to “slide” within and between and covers the whole spectrum of the low-frequency signals emitted by the body.

Simultaneous action through 2 channels with each of them being tuned individually.

Two times as many action modes — 16 modes instead of 8 (in professional version).

And this can replace 2 professional devices at a time and allows working on two symmetrical areas consistently or individually. And this speeds up recovery.

Only 2 operating controls — the button and the scroll switch, which enable quick and easy access to the most important settings.

Being able to adjust the display for 2 — left-handers and right-handers, provides comfortable use for those who find it more convenient to work with left or right hand.

At the moment, this device represents the latest achievements of “LET Medical” in the field of equipment implementing efficient non-invasive technologies of medication-free restoration of health and well-being.

“LET Medical” tends to develop each model for some specific purpose, as this way it can produce maximum effect in the field it is intended for. But now, having spent 5 years on developing a new Myoscen version, we decided to depart from the rule and created two devices which are absolutely equal in effect of treatment — two Myoscens. Yes, they are equal, but only in the action modes used in the device and efficiency... and that is all! And what makes each of them special — is the difference. 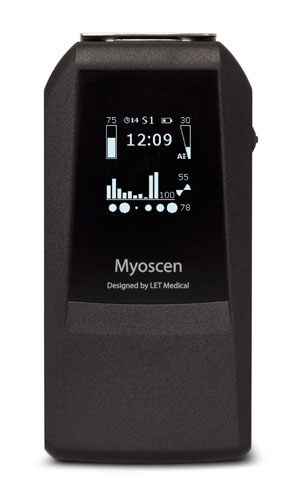 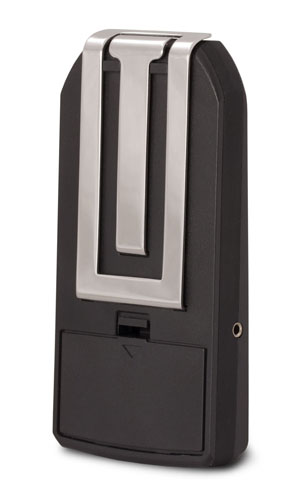 One version — quite impressive, two HD OLED displays. Here we have full range of individual settings in the menu, statistics, graphics of body reactions and dose completion, digital readings for professional use, timer of action and timer of the whole session, battery status, etc. Quite “jam-packed” device. 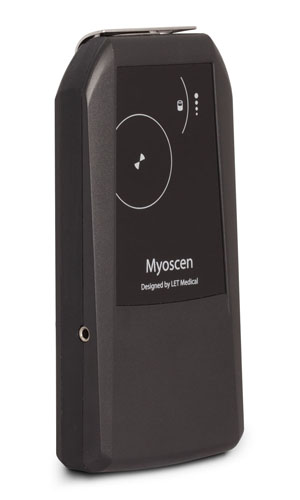 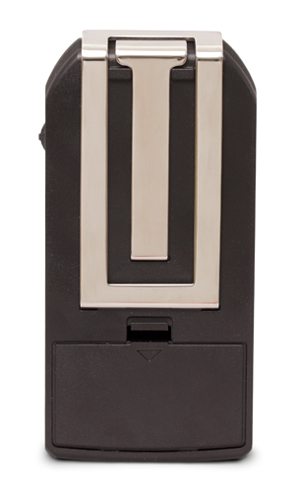 Another version is quite “modest” — with LED indication. Very simple, only necessary things. Provides quick access to action modes and allows changing settings on the go. Body reaction, dosage, action energy level and even battery status are clearly displayed by LED indicators. Main advantage of this version is that you can quickly and easily operate it. It is very robust and consumes little energy, that is all you need to administer quick aid.

This is the first device with such a minimum of operating controls. Only one “wheel” — three-position switch.

We are proud of the electrodes in this device! They are made of steel which doesn’t contain nickel. As we know, nickel is not a healthy metal at all. But this is not all. The electrodes are detachable, they are fixed with the help of magnets and you can remove them easily for cleaning and disinfection.

The casing was designed in an “everyday carry” form.

The electronic system of the device enables implementation of COSMODIC technology within average range. This allows applying Myoscen for treatment of various diseases as a most universal device. But of course, it can’t treat everything, its main purpose is being a “home doctor”.

This device was developed by “LET Medical”, production is carried out by our manufacturing partner in Voronezh, headed by Fursov Gennady Yakovlevich.