Technology of medication-free regeneration and recovery.

Such construction of the electrodes was specially protected by individual patent for invention No. 2257235 of 02 February 2004 and was actively used in further models. 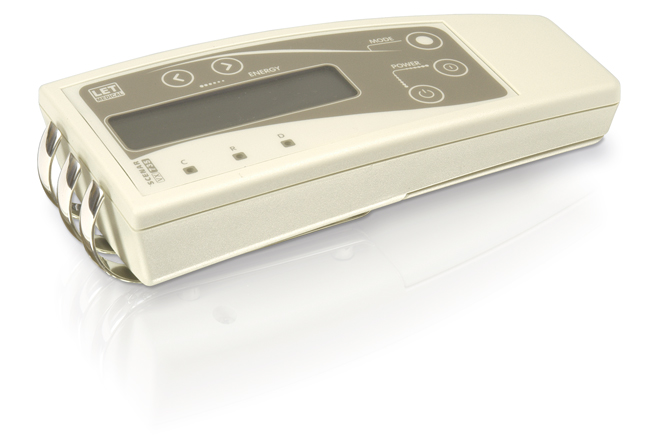 Professional device which is implementing combined technology of treatment SCENAR-COSMODIC.

Continued modification of the 735 series. This device had electrodes made of pure silver, in the form of “sleigh runners”, which later would become detachable. All output characteristics were changed and COSMODIC technology was improved. All the rest remained as in the previous 735. 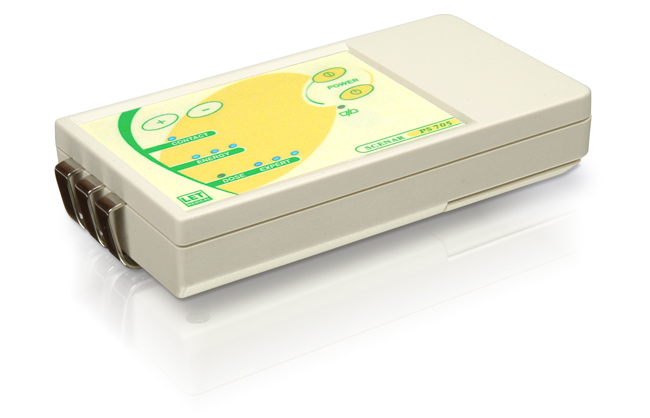 Analog of the 713 but in the “Pocket” series casing, OKW.

Electrodes are unusual — in the form of three bent plates, looking like sleigh runners. Again made of Zepter stainless steel. The front-end part of the electrodes allowed working on small areas and the part of the electrodes placed on the underside of the casing allowed to lie on them during prolonged treatment. Flat casing was used specially for that. 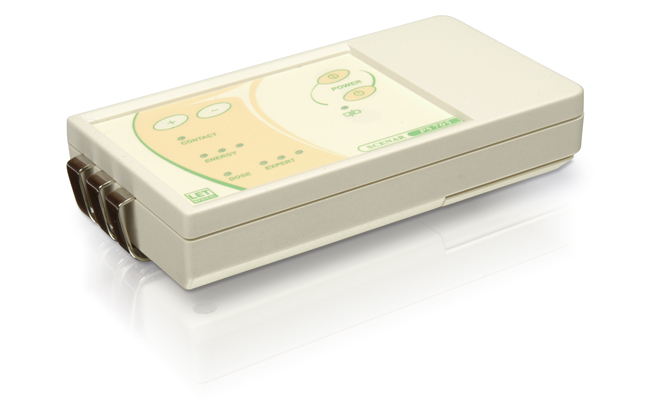 Cheap version of the 705, which was developed specially for production at the “Priboy” factory, Taganrog. 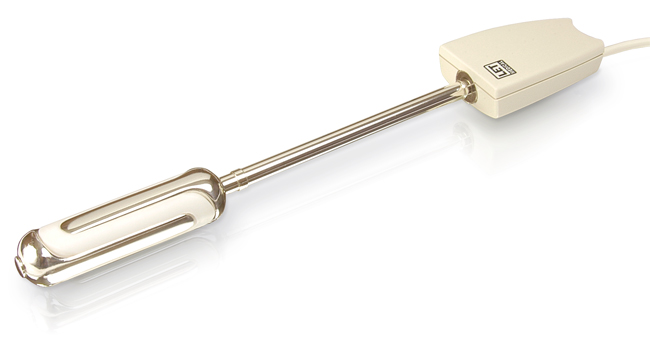 The rectal electrode is made in the form of two “forks” and provides radial-directed action. Insulator is made of fluoroplastic. 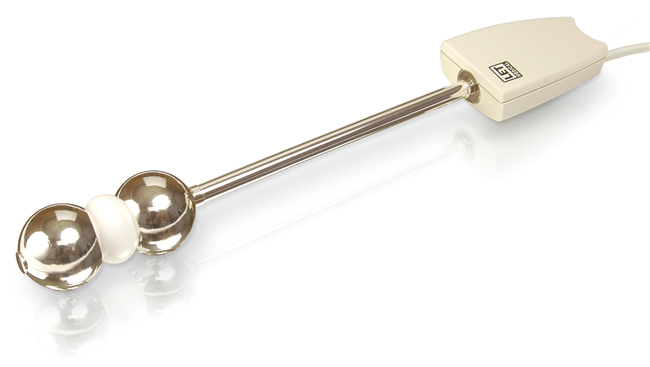 Vaginal electrode is made in the form of two “balls” and provides circular action. Fluoroplastic insulator has smaller diameter between the two “balls” which allows forming vacuum cavity due to contraction of vaginal muscles. This allows the “balls” to fit tightly to the vaginal walls.

Current-carrying element is the silver tube (first contact) which has a spoke inside (second contact). Diameter of the tube enables connecting the remote electrode to the standard jack.

Special feature of these electrodes is that you can quickly disassemble them for disinfection (within 5–7 seconds).

“Ski”-electrodes are protected by patent for invention No. 2257235 of 02 February 2004, which confirms prerogative right of “LET Medical” for ownership and disposal of this object of intellectual property. 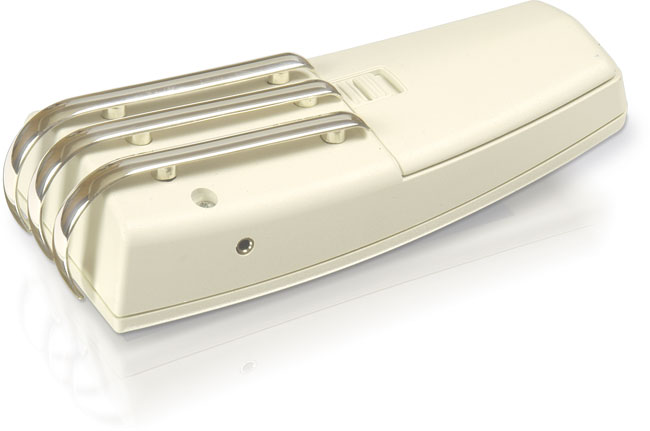 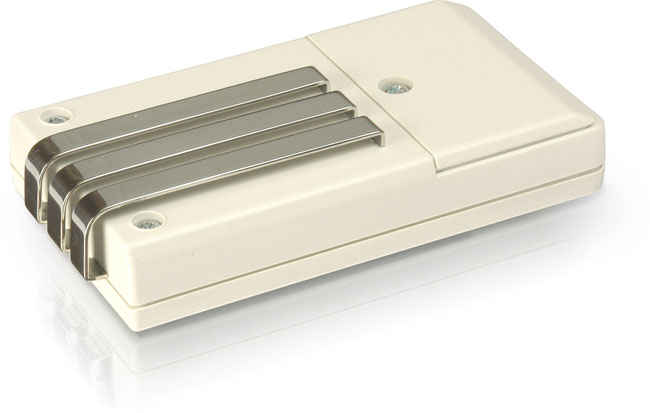 New — OLED display. Now it is graphic, gray-shade. First attempts to build in the electronic reference book. The first device which has only COSMODIC technology. It was implemented in full and provided with automatic energy and “depth” regulations required for that.

Touch switch-on, like in the 735 — switches on when you touch the electrodes.

COSMODIC technology was approved by the Federal Agency for Public Health and Social Development of the Russian Federation and was implemented in all 700 series devices.

All devices, and even remote electrodes, have Registration Certificates and Certificates of Conformance. Now COSMODIC technology can officially be used in all medical institutions. 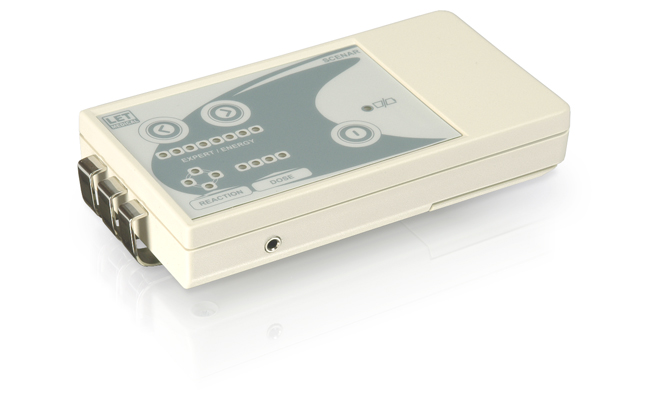 Casing OKW, “Pocket” series — the same as in the previous 705, but a bit smaller, to fit in the hand better.

Sound indication can be switched off. 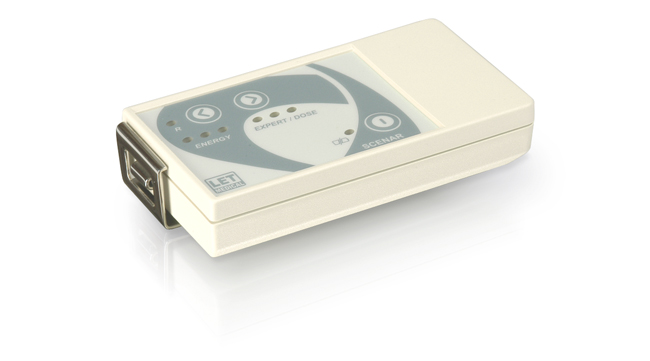 This device is similar to the 705, but cannot be connected to remote electrodes and does not have special mode for action on mucous membranes. 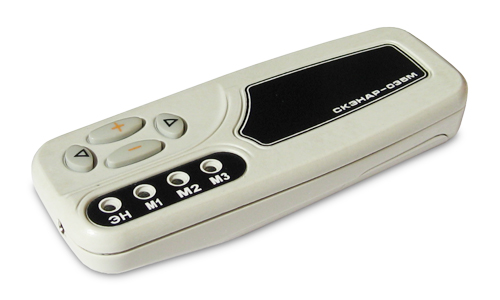 ““MyoScen” L.L.C., Voronezh
Special in everything. In spite of the name 035M, it is not a successor of any previous device.
Casing was made specially for this device — home-made design and manufacture.
Output stage is like it was in ENS-03 but upgraded. The name followed from it too — 035M.
The whole electronic block is implemented on one custom-made EPLD.
This device was developed taking into account minimal manufacturing costs. Therefore requirements for quality and effect of treatment were understated.
Power supply: special — 2 galvanic cells 3V each, like in cameras.
Abroad this device is mostly known as The D.O.V.E.

Patent for an invention
“Method of SCENAR-therapy” 2007 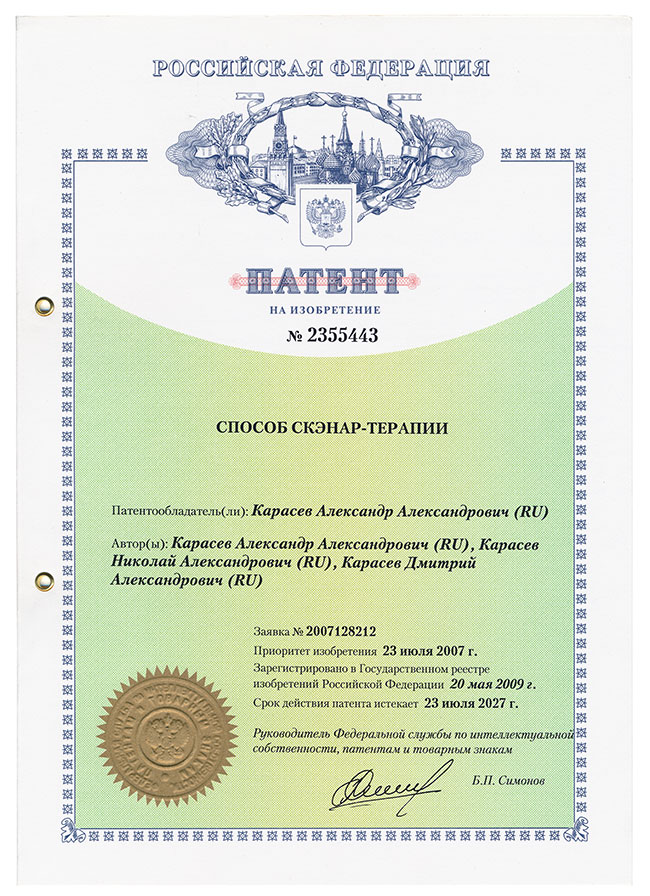 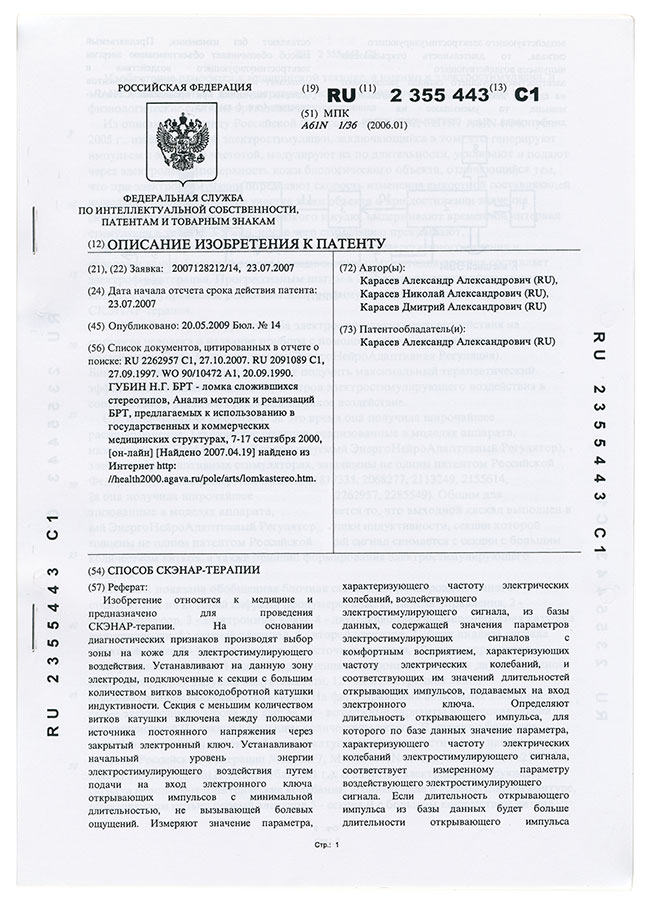 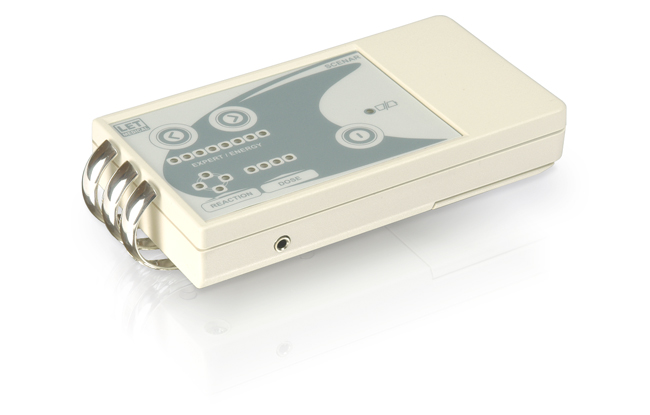 Added: automatic switch-over to the special impulse for action on mucous membranes with rectal and vaginal electrodes.

All the rest characteristics are identical to the PS705 with steel electrodes. 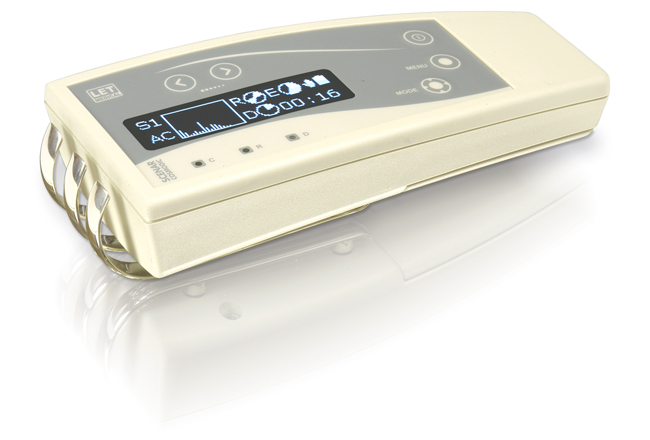 Two output stages in this device are not the most important feature, like was in the 513. In this device we reconsidered the approach to the work of biological feedbacks. Now it is based on an absolutely new principle — forecasting instead of copying. This allows the device to be ahead of the body reaction and significantly speed up the recovery. 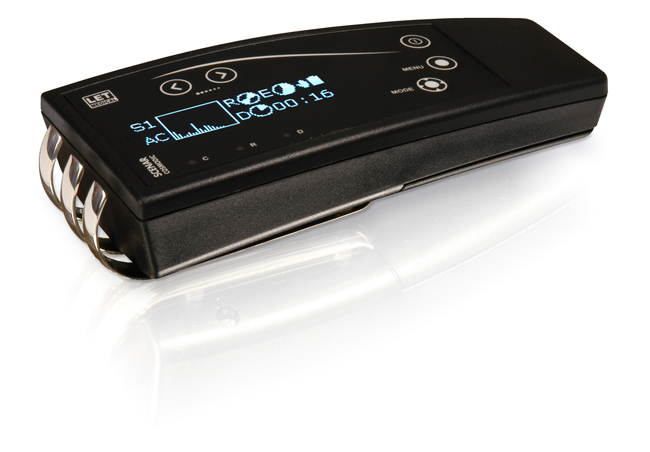 Global Financial Crisis.
Money disappeared.
And we have made the most expensive and most advanced EX735Ag Modific.

At first, there were just 3 experimental models. We have tested them and got unbelievable and very quick results. The quickest was improvement of condition in 10 seconds of action. That's an unbroken record so far. Then there was a limited edition of 20 Modifics, by special order. And then it became the most popular and most often ordered model, in spite of all the crises. That we did not expect. And no one would. 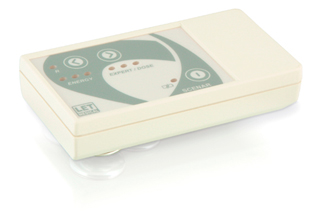 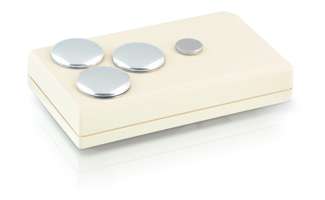 This device is like peeping through a keyhole to the future. It was a limited batch, but we implemented and tested some new ideas in it. The most important is the electrodes. They were made in a form of three silver buttons having a rare-earth magnet inside, and were placed so that they form a triangle. Triangular positioning of the electrodes allows more precise focusing of the action signal — feeling like a pyramid with its top coming deep into the body. Together with the action of silver it provides action of magnetic field.

This device was a kind of “prototype of the prototype” of future devices. 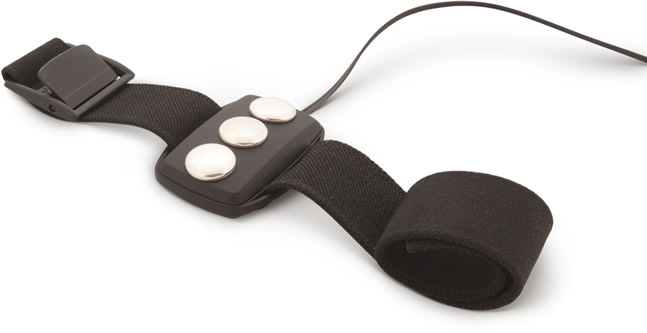 And then we made remote electrodes — Tablet02Ag and Tablet 03Ag, so that now everyone could benefit from the “buttons”