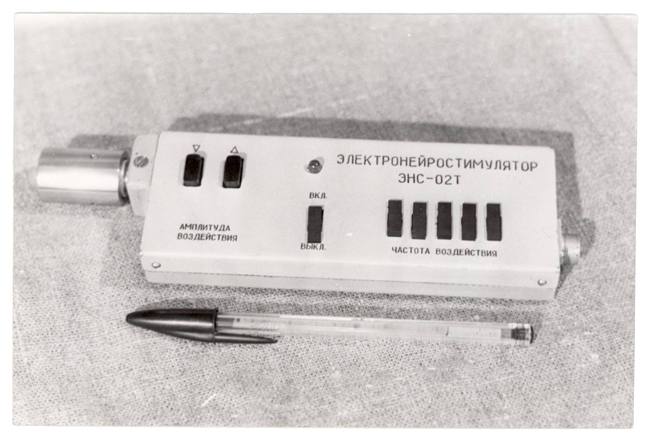 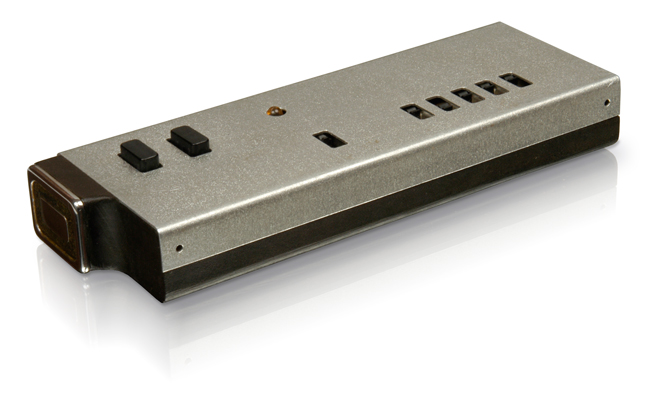 Casing was made of ebonite.
Electrode was coaxial, square (or better say, rectangular shape), non-detachable.
All the rest remained the same as in the first modification . 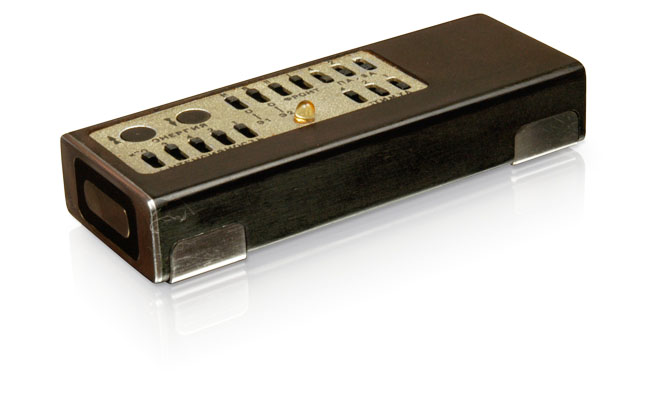 The most successful model of all times and generations.

Casing was made of ebonite and assembled without a single screw. Faceplate — sandblasted aluminium.

Electrode: coaxial, rectangular shape (the rectangle had such good proportion of the sides that is still copied in all devices). This device had one more type of electrodes — “paravertebral” — in the form of two plates made of stainless steel. At the same time they served as locks of the casing. Socket for remote electrode became smaller.

Energy regulation: slide control, with “up” and “down” buttons. Two LEDs indicated energy and frequency. The frequency was set with digital binary code (like in ENS-02). Four different levels of “depth”. Time of stimulation and pause interval are also set with binary code, similarly to frequency.

Power supply: silver-zinc galvanic cells from military satellite-born systems. They could supply power to the device during 10 years of home use.

The most unique thing about this device is that it was assembled with three small-scale integration circuits — three inverters in one chip. And 96 diodes! 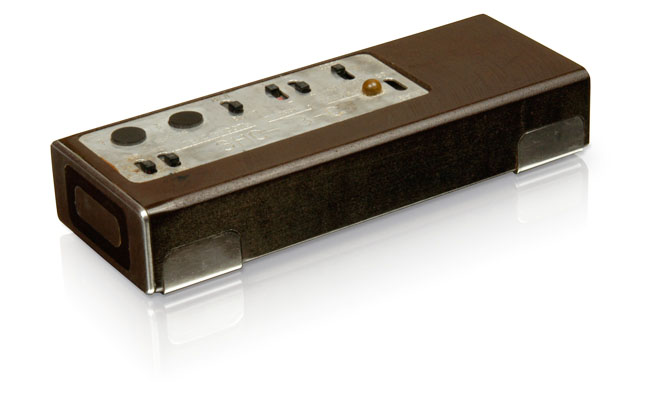 The same model but with simplified operating control system — it had less switches. 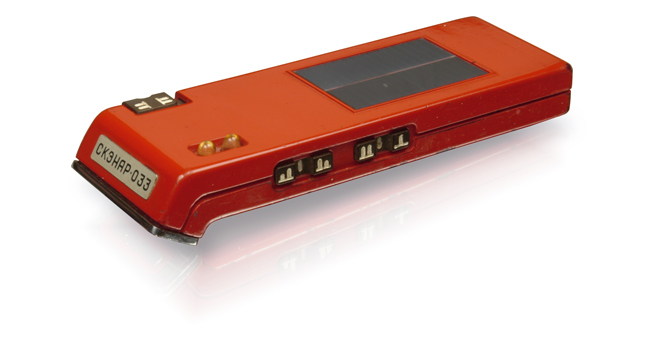 The first device named SCENAR. It was developed for serial production at the “Priboy” factory (Taganrog). The casing was milled out of one solid piece of Plexiglas. The casing was 0.7–1.5 mm thick and bent in the region of the electrode to make it more convenient to use. This was full imitation of molded plastic. In fact, this casing was much better than the real plastic one which would be made later.

Electrode: coaxial, rectangular, with little “bumps” on the surface to provide better contact of the electrode with skin on the hairy areas.

Digital multistep control of energy with “up” and “down” buttons. This device had only two frequencies of action which could be selected with the buttons. Two LEDs indicated energy level and frequency.

Power supply: built-in accumulator was charged from solar batteries which were developed specially for this device — one silicon wafer produced 15V instead of usual 0.4V! 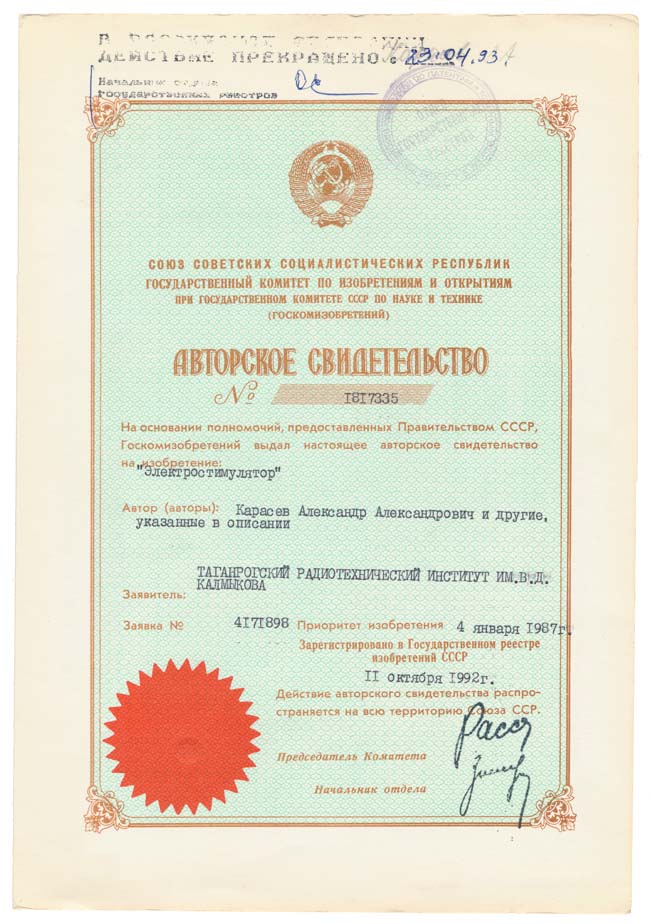 Exclusive rights to this patent belong ONLY to the authors named in the patent, namely: Karasev A. A., Zakharevich V. G., Nechushkin A. I., Revenko A. N., Kibirev A. A.

Any claims and information spread by the third parties regarding their rights to this patent are considered as infringement of the authors rights and laws of the Russian Federation.

Back in Krasnodar times Alexander Karasev started mountain climbing (the Caucasus was nearby). He could not pass over his fellow climbers. Frostbites, hypoxia, ultraviolet burns or any disease in the mountains can be a catastrophe. Specially for them, he made one and only device — SCENAR T4-01 “Lhotse” powered by solar battery. This is the first device which was taken to the mountains and was used during expedition to Lhotse (Nepal). Even the casing was made by Alexander Karasev himself on the milling machine. 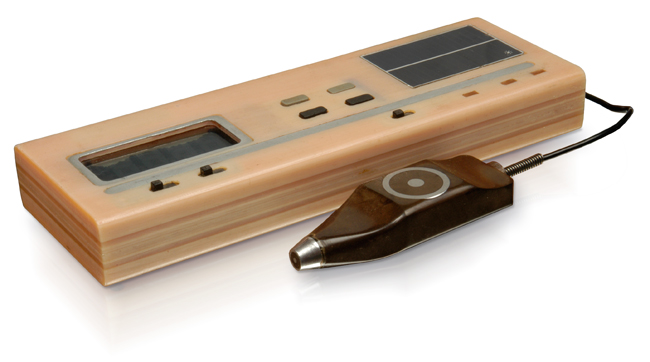 Casing was milled out of one solid piece of vinyl plastic and sealed up.

This device had only remote electrode. 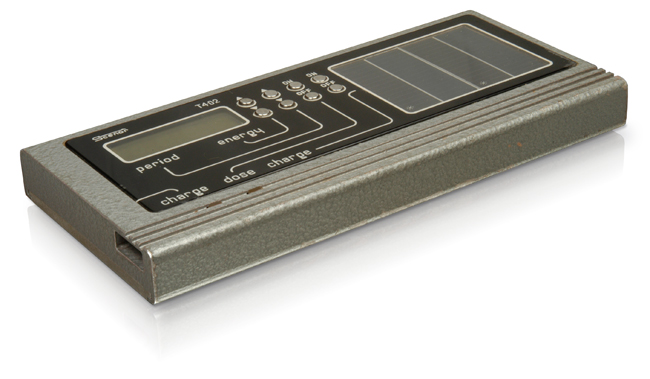 The casing was milled out of one solid piece of aluminium. It was so robust that could be used as defence against racketeering, in case of need.

This device was specially designed for use at medical cooperative institutions.